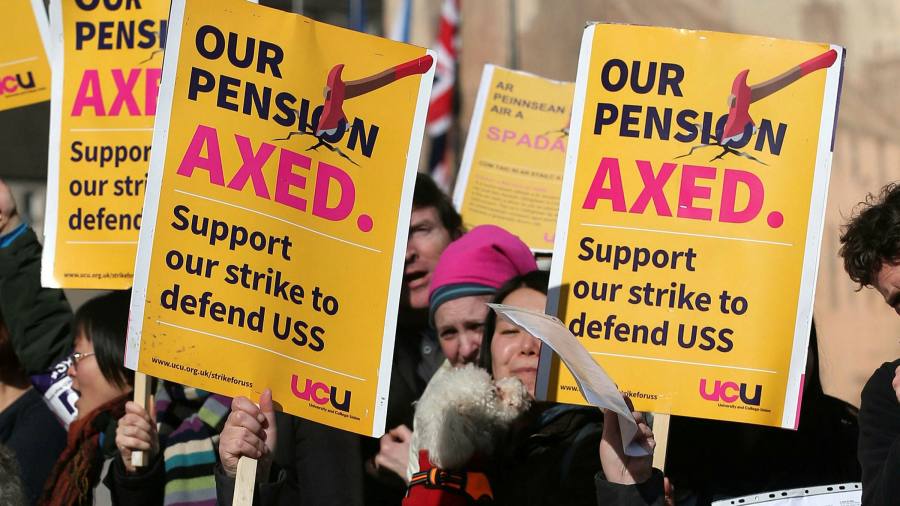 The deficit at the UK’s largest private-sector pension fund, serving the pressured university sector, has more than doubled to £13bn as Covid-19 market turbulence ramped up the cost of retirement promises.

On Wednesday, the Universities Superannuation Scheme, which has more than 400,000 members, will report the plan’s funding hole had widened to £12.9bn at the end of March this year from £5.4bn the same time a year ago.

The worsening of the scheme’s financial position largely reflected falls in interest rates, aimed at stimulating the Covid-19 ravaged economy, but which have the effect of inflating the cost of “defined benefit” pension promises.

Over the year the scheme’s liabilities, or cost of meeting pension promises, climbed from £72.8bn to £79.4bn, according to its annual report published on Wednesday.

The scheme’s funding ratio — or measure of its ability to meet all pension promises in full — slipped from 93 per cent to 84 per cent over the year.

“The material reduction in the funding ratio reflects reductions in interest rates over the year and the devastating impact of coronavirus on global markets in the final quarter,” said the annual report.

“The depth of the economic shock brought about by the pandemic has highlighted the long-term challenges facing open DB pension schemes like USS; challenges that we intend to work with our stakeholders — Universities UK and University and College Union — to address through the ongoing 2020 valuation.”

The Universities Superannuation Scheme, with total assets of £67bn, is the principal pension scheme for universities and other higher education institutions in the UK with almost 460,000 members across 340 institutions.

The widening of its funding hole comes as hundreds of university employers are under pressure to step up pension contributions, while at the same time facing revenue losses from Covid-19-related disruption.

Over the year to March the total value of USS’s assets also slipped from £68.4bn to £67.6bn as its investments underperformed by 1.7 per cent.

The USS said the pay of all USS employees was benchmarked against comparable roles, under the oversight and scrutiny of the Trustee Board, and reflected the skills and expertise required for each role and recruitment in a competitive financial services sector.

The USS £13bn funding shortfall, as reported in its annual accounts, was calculated on a “monitoring basis” that does not involve the same detailed review of underlying assumptions that happens with full three-year actuarial valuations, including the scheme’s 2020 health check currently taking place.

Women get no credit in Latin America

UK and Japan close in on post-Brexit trade deal