US Dollar Index Plunges Towards an Almost 3-Month Low

The US dollar index plummeted to an almost three-month low of 97.24 earlier today, continuing the sell-off of the last six days. The price penetrated the 200-day simple moving average (SMA) and the 61.8% Fibonacci retracement level of the up leg from 94.50 to 103.80 at 98.06, opening the path for a bearish picture in the short term.

The RSI turned lower near the oversold territory. At the moment, it has flattened near the 30 line in support of a weakening movement in price. The MACD oscillator is extending its negative structure as it stands beneath its trigger and zero lines.

Further declines may meet support around the 95.10 barrier, which halted downside movement in March 2019. Not far below, support could occur around the 17-month low of 94.50, achieved on March 9.

Concluding, the index has been on a decline movement since May 25 and further losses could endorse the near-term negative bias. 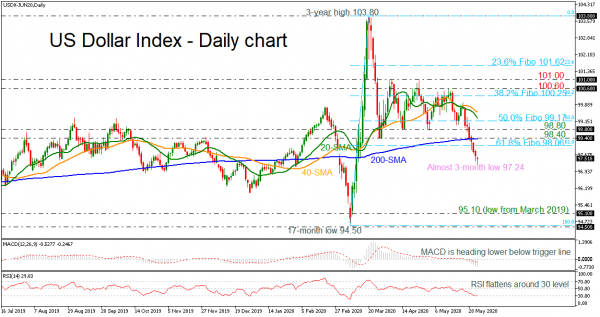 US Job Market Moving in the Right Direction