US Inflation Slowing to Multi-Year Lows

US inflation remained a tug-of-war between lower prices for goods and services consumers are buying less of (gasoline, apparel, airfares, hotels) and higher prices for essentials like food at home, which posted its largest back-to-back monthly increase since the 1970s. Disinflationary forces prevailed once again in May, with lower gasoline prices dragging headline inflation down to nearly zero, while CPI ex food and energy is growing at its slowest year-over-year pace since 2011 (core prices having fallen in three consecutive months for the first time in history). Downward pressure from gasoline prices should start to ease in June as reopening supports demand (pump prices are already starting to pick up). But we expect core inflation will remain contained by persistently soft overall demand, even as an economic recovery gets underway over the second half of the year.

The Fed isn’t expected to make any major policy announcements this afternoon, but is likely to reiterate a “do whatever it takes” approach to supporting the US economy through the coronavirus crisis and during the recovery. Updated economic forecasts (the first since December) will give some idea of how quickly policymakers expect the economy to recover, and how long disinflationary forces are likely to persist. We expect those projections will underline the need for significant monetary policy support to remain in place for an extended period. At some point in the near future the central bank is likely to commit to that more explicitly by providing forward guidance on the path of interest rates and QE. 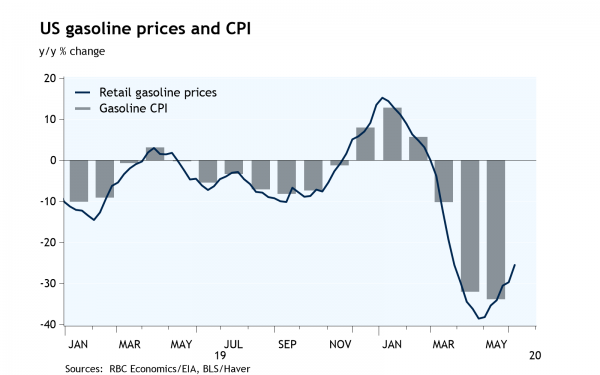