US Jobs Numbers as Bad as Feared

This morning’s US employment numbers confirm what we already knew: April was a historically bad month for job losses. Non-farm payrolls fell by 20.5 million—more than doubling the cumulative 8.7 million jobs lost over two years during the last recession. Every major industry saw a drop in employment though four services sectors accounted for 70% of the decline: leisure & hospitality, education & health, professional & business services, and retail. With job losses being concentrated in lower-paying industries, an increase in average hourly earnings in April was nothing to cheer.

The separate household survey showed a slightly larger 22.4 million drop in employment, though the number of unemployed persons rose by a lesser 15.9 million. The number of persons not in the labour force (and thus not counted as unemployed) but who wanted a job increased by 4.5 million. If they were counted as unemployed, the jobless rate would have been slightly more than 17% rather than the 14.7% reported. The BLS also noted that if workers who were counted as employed but absent from work for “other reasons” were properly classified as unemployed on temporary layoff, the unemployment rate would have been nearly 5 ppts higher. All told, the record 14.7% unemployment rate in April (already 4 ppts above the previous record high) understates the true degree of slack in the labour market.

With many states now beginning to gradually re-open their economies, we could see some signs labour market healing as early as May (though higher-frequency data show another 7 million initial jobless claims in the two weeks since this morning’s survey). While the timing is uncertain, we should see some big job gains in the coming months as more and more businesses are allowed to re-open their doors. The fact that most layoffs have been temporary, along with government policies that are meant to encourage re-hiring, should assist the recovery in employment. That said, we think the US economy will only partially rebound over the second half of the year amid lingering health concerns and a need to rebuild savings. It will take a long time for the labour market to fully recover from the historic shock inflicted over the past two months. 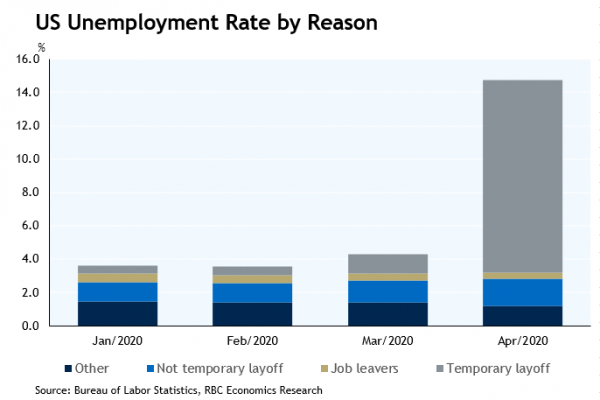 Silver May Have Its Support at $22 Price Level