Week Ahead – RBNZ May Increase QE; Aussie, UK and US Data to Deepen that Sinking Feeling

There can be no hiding from the awful economic data that is now pouring in from all angles as we move well into the second quarter. Australian jobs, UK Q1 GDP, and US retail sales and inflation numbers will be the next key releases to showcase the virus turmoil. But amid growing optimism about the pandemic easing, the Reserve Bank of New Zealand will likely err on the side of caution at its policy meeting, posing a downside risk for the kiwi and other commodity dollars.

RBNZ to hold off negative rates for now

New Zealand’s central bank entered uncharted territory in March when it launched its first every quantitative easing (QE) program. That program will be the focal point of Wednesday’s meeting as there are strong odds the RBNZ will scale up its purchases as its heavy intervention to date in the bond markets suggest it may soon reach its initial target of NZ$30 billion New Zealand government bonds. What is less likely are negative interest rates as the bank has signalled the official cash rate will be held at the current 0.25% at least until March 2021.

However, that hasn’t stopped Governor Adrian Orr from publicly exploring all possibilities, including buying bonds directly from the government (rather than from secondary markets), which would amount to debt monetization. Orr’s dovish views have been holding back the New Zealand dollar when compared to its peers like the aussie and loonie. Kiwi/dollar remains the worst performing major year-to-date and is down about 9% despite the impressive rebound from its March lows. 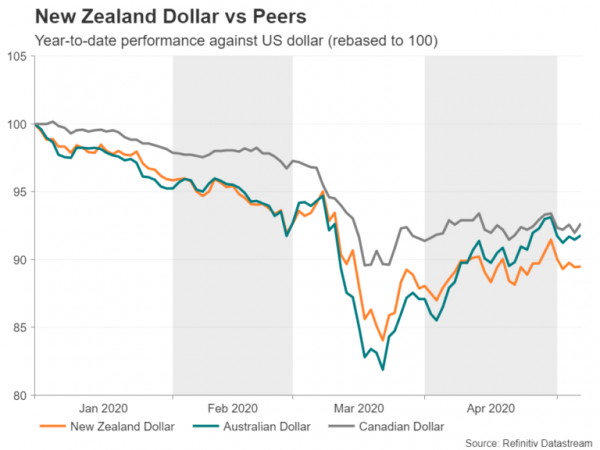 Hence, further QE as well as more dovish remarks could drag on the kiwi next week.

After crashing spectacularly in March, the Australian dollar has come back fighting and even managed to top the $0.65 level at one point during its rebound. With signs that China is continuing to see economic activity picking up and the lockdown in Australia also being relaxed, there is plenty to sustain the aussie’s gains.

However, Thursday’s employment report could prove to be the aussie’s biggest test yet as, so far, the leading economic indicators out of the country have been misleading. March’s jobs figures were surprisingly positive, but that is only because the labour survey was carried out before the lockdowns were introduced. Retail sales for the month were unusually strong too. But they were skewed by the surge in supermarket sales as people stockpiled before going into quarantine. The April jobs numbers are therefore expected to paint a more accurate picture of the situation and this may yet knock the aussie of its perch. 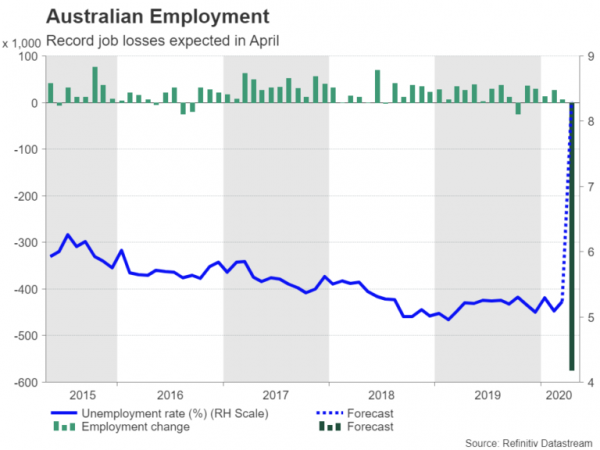 Another potential risk for the aussie is data from Australia’s largest trading partner – China. Monthly barometers on industrial output, retail sales and urban investment are due from China on Friday and investors will be eager to see more evidence that the reopening of the economy gathered pace in April. However, should the April readings underwhelm, they could upset equity markets as they would dampen hopes of a V-shaped recovery.

Boris Johnson’s honeymoon period as UK prime minister came to a swift end in March as the outbreak of the coronavirus put his leadership skills under the spotlight. Apart from his government’s failings at the onset of the outbreak, Johnson’s problems worsened when he himself was struck down by the virus, forcing him out of action at the height of the crisis. Johnson’s next challenge will be to put a positive spin on what is expected to be a dire first quarter GDP report on Wednesday.

The UK economy is forecast to have contracted by 2% on a quarterly basis, with March output alone predicted to have plummeted by 7%. Industrial output figures for March due the same day are anticipated to be equally bad. 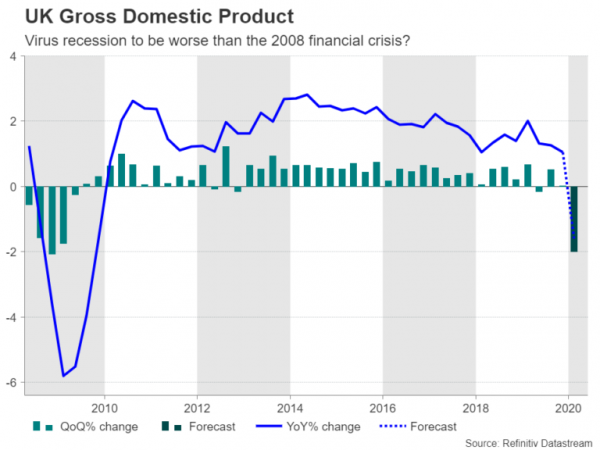 The pound is likely to come under selling pressure if the GDP estimate disappoints as the Bank of England has hinted it remains open to more stimulus should it be needed. An expected announcement over the weekend by Johnson on a roadmap to take Britain out of lockdown may provide a bit of a boost to sterling early in the week. But with the clock ticking for Brexit trade talks, which according to reports has been slow-going, any upside will probably be limited.

With millions of Americans losing their jobs in recent weeks and the majority of households forced to stay at home, the dent on April data is set to be highly visible in the raft of releases coming up in the United States over the few days. First up, inflation numbers on Tuesday are expected to show the consumer price index falling to a near 4-year low of 0.8% year-on-year in April. Producer prices will follow on Wednesday before attention turns to retail sales and industrial production figures on Friday when it will be round two of the virus bloodbath that began in March.

After tumbling by an upwardly revised but still shocking 8.4% month-on-month in March, retail sales are forecast to set a new record, falling by a massive 10% in April. The slump in industrial activity is also anticipated to have accelerated, with production shrinking by 11.6% m/m. But there might be a glimmer of hope that the sector is stabilizing as the more forward-looking Empire State manufacturing survey by the New York Fed is expected to print at a slightly higher -68.0 in May. 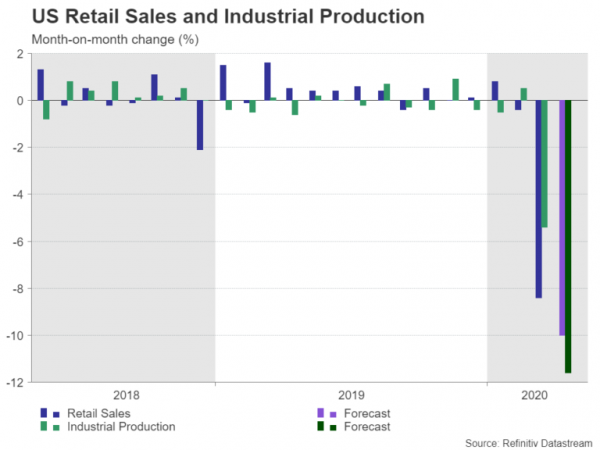 But the projected grim readings may not do much in cracking the unbreakable US dollar, which has been steadily edging higher over the past week, mainly at the expense of the euro, as appetite for safe havens remains strong.

In contrast to the king dollar, the euro has been slipping amid growing worries about the political will in Europe to safeguard the economy. Eurozone industrial production readings for March out on Wednesday will likely confirm the severity of the damage to the economy by the lockdowns, with output forecast to have declined by 10.5% m/m. On Friday, the second estimate of Eurozone GDP is due for Q1, but the focus will mainly be on Germany’s first print. The German economy is expected to have contracted by 2% over the quarter. Given the intransigence of Germany to support a large EU-wide fiscal stimulus, worse-than-predicted numbers may inadvertently help the euro as they could push politicians to do more to prop up Europe’s virus-stricken economies.

USD Index Outlook: The Dollar Falls Across the Board after ECB