As global markets set their sights on a quick recovery from the COVID-19 crisis, key economic data for April – when the pandemic impact is thought to have peaked – will likely be sidelined next week. The Federal Reserve might also struggle to attract the usual attention when it holds a scheduled meeting as investors are not anticipating any new policy action. But as safe havens like the dollar and yen give way to virus-battered currencies, there are plenty of lingering risks that could upset the recovery story.

Chinese exports likely faltered in May

China’s economic recovery is being watched closely by the rest of the world as it is one step ahead of that of other countries and therefore a good indication as to what to expect elsewhere. But after rising unexpectedly in April, May’s export numbers may not be quite as upbeat when released on Sunday. Exports are forecast to have tumbled by 7% in May as the deepening downturn in other parts of the world probably dragged on global demand. But imports are predicted to have fallen at a slower pace compared to April, possibly signalling strengthening demand domestically. 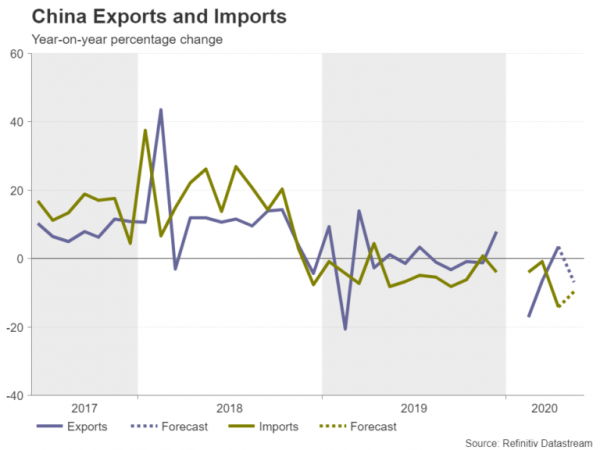 More indicators on the state of the local economy will follow on Wednesday with producer and consumer price inflation.

The Australian dollar would be at most risk if the trade figures were to spark jitters about China’s growth prospects as the Australian economy is hugely dependent on Chinese buyers for its goods and services. Aussie traders will also be keeping an eye on some Australian data, mainly, the NAB business survey on Tuesday and Westpac’s consumer sentiment gauge on Wednesday.

Catastrophic plunge in European industrial production may not shock 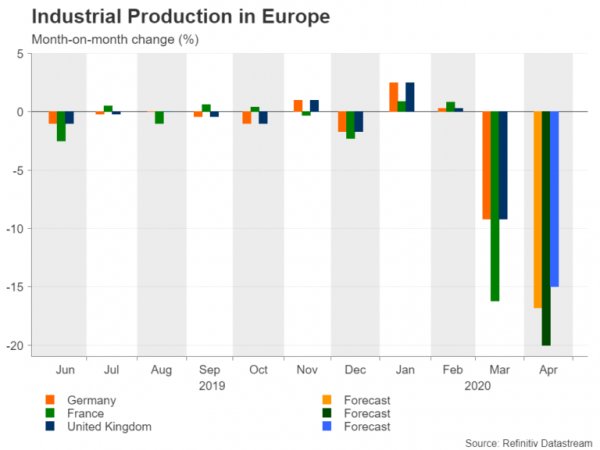 Most of Europe, including the UK, was in lockdown in April so there can be no doubt many factories lay idle during that period, which will likely translate to double digit percentage falls in industrial production. Yet, as these historically large contractions in industrial activity make the headlines, markets appear to have already priced in the worst and the more forward-looking survey data suggest the economic slump bottomed out in April, with many investors now turning their focus to the shape of the recovery.

Politics to drive euro and pound

Unsurprisingly, there’s not expected to be a huge reaction in the euro and the pound to these releases. Neither is there anticipated to be much of a response to the revised Q1 GDP estimate for the Eurozone on Tuesday, though the UK’s monthly GDP print due on Friday may draw more attention.

Instead, traders will probably be on the lookout for any further updates on Brexit after the latest round of talks went nowhere, threatening to derail the pound’s rebound, and for signs that the EU is moving closer to agreeing a virus rescue fund when the bloc’s finance ministers hold a meeting on June 11. Stimulus hopes have propelled the euro to 2½-month highs versus the dollar, but those gains are unlikely to be sustained if EU leaders fail to approve in the coming weeks a €750 billion fiscal package proposal that the markets have put their hopes on.

No risk from data to yen’s retreat

Japan’s GDP change could get revised higher when fresh estimates for the first quarter are published on Monday. It follows robust capital expenditure numbers for Q1 in the past week. However, April machinery orders due on Wednesday will likely highlight the challenges facing Japanese manufacturers even if the immediate impact from the virus crisis on the economy proves to be less severe than in other countries. 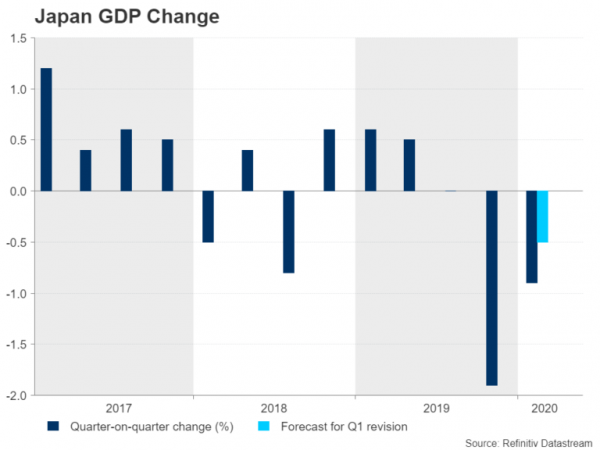 It’s also worth pointing out that Japan’s economy began contracting sooner, in the final three months of 2019 when trade tensions were weighing. So a relatively mild pain in Q1 does not necessarily imply a stronger outlook for Japan as global trade is now under strain from a different source, as the pandemic has wiped out consumption in rich economies and caused significant disruption to supply chains.

Hence, the Bank of Japan is anticipated to maintain its ultra-loose monetary policy stance for the foreseeable future and may even announce some additional measures to help local businesses at its next meeting later in June, meaning risk sentiment will continue to be the yen’s biggest driver. The safe-haven currency has been on the back foot lately as recovery hopes have bolstered risk appetite and that trend looks set to continue in the coming days.

No surprises from the Fed

The US dollar has been the preferred currency in the flight to safety during the pandemic with demand being so strong that it has lost its usual correlation with Treasury yields and economic data. That was true when the dollar didn’t budge from dire retail sales and employment readings for the US economy, and is true now when investors have started to dump the currency just as some green shoots of recovery are emerging.

Given that the only real data highlight next week will be the May consumer price index on Wednesday, there’s not a lot on the US calendar that will be capable of moving the dollar. The producer price index on Thursday and the University of Michigan’s preliminary consumer sentiment survey for June are the only other noteworthy releases. 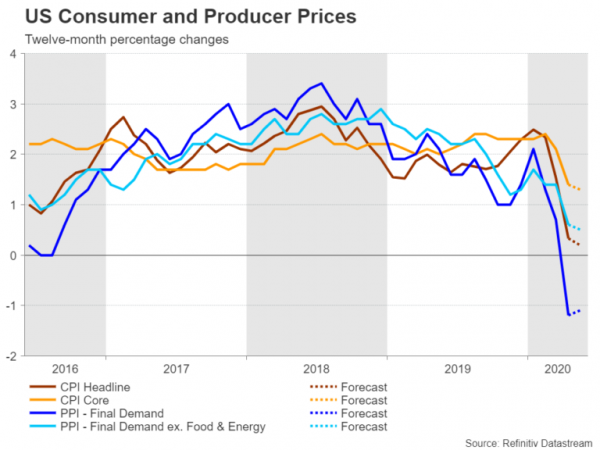 However, the greenback might find some support from the latest gathering of the Federal Open Market Committee (FOMC) on Wednesday, even though the meeting is expected to be uneventful. The Fed has not only acted swiftly and effectively since the onset of the crisis, it has also been making regular tweaks to its emergency policies, having as recently as in the past week announced an expansion of its Municipal Liquidity Facility – one of many emergency lending facilities launched by the central bank since March.

Further amendments to its many programs cannot be ruled out at the June meeting, though the most likely scenario is that Chair Jerome Powell will reaffirm the Fed’s ‘whatever it takes’ pledge. What will be interesting to see, however, is whether Powell uses slightly more optimistic language after the recent tepid signs of a turnaround in the economy. Powell has been out-of-sync with the markets, sounding a much more downbeat tone than price action in equities would suggest. But traders may take more notice if they detect any shift in Powell’s pessimism, which may help put a floor under the dollar’s latest slide.