LONDON (Bloomberg) –The turbine inventor Henrik Stiesdal is small in the shadows of gigantic curves of steel, watching workers weld towers that will be rooted to the seabed. This factory in the Danish countryside has churned out thousands of masts for wind turbines whose blades can stretch more than 500 feet. It’s an important contribution to a global wind revolution that’s supplying electricity to millions of homes worldwide.

Soon the factory will set about a new task, manufacturing components for a different kind of turbine, designed by Stiesdal, that bobs on the open sea. These structures promise to put the strong, consistent gusts that blow over deep waters within reach for the first time. The turbines now found around Denmark, England, and the other coastlines of the North Sea are made for shallow water and require large underwater structures to fasten them in place. “Normal places don’t have shallow water near population centers—they have deep water,” says Stiesdal, a legendary turbine inventor and former executive at some of Europe’s biggest wind companies. This situation renders many coastal places unsuitable for wind power. “We could power California many times over with their offshore resource,” he says, “but it all has to be floating.”

If the next generation of wind farms can float, and if costs can be kept low, it could usher in an era of almost unlimited, emission-free energy. The International Energy Agency (IEA) estimates that floating wind turbines could help provide enough electricity to satisfy the world’s electricity needs 11 times over, based on expected power demand in 2040.

At 63, Stiesdal has taken every step in the modern evolution of wind power. As a young man he designed the first turbine and later took part in the introduction of the first offshore wind farm, creating what’s now one of the fastest-growing forms of renewable energy. He’s seen global wind capacity grow from virtually nothing in 1978 to more than 600 gigawatts today, according to BloombergNEF data.

As 2019 ended, about three-quarters of global offshore capacity lay in Europe, mostly clustered around the U.K. and Germany. This regional dominance owes partly to the North Sea’s relative shallowness. Although similar waters off China, Vietnam, and the eastern U.S. seaboard could someday add more wind farms using established technology, there’s greater potential farther offshore. Many more places, including California, Japan, and South Korea, have heavy power needs, big ambitions to lower emissions, and deep seas. Not to mention that people tend to complain—loudly—about turbines within eyesight of the shore. The open sea isn’t in anyone’s backyard.

Now Stiesdal is among those bringing about the floating-energy future. With offshore wind power increasingly competitive with the price of fossil fuels, expansion into deeper waters could help rid electric grids of carbon emissions for good. “I had some bad moments thinking about the climate,” he says. “The politicians will not solve it. We need to solve it ourselves.”

After he finished high school in rural Denmark in the late 1970s, Stiesdal heard about a nearby teachers’ college that was running an experiment to generate electricity from wind. He decided to try making a model turbine in his family’s home. He built the first blades from steel and high-grade nylon, working on the living room floor as his mother knitted on the sofa.

The first turbine he made was small enough that he could lift it with one hand. “Once you got it spinning, it got to be alive, and you could feel all the small things in the wind,” Stiesdal recalls. “I was hooked.” It worked well enough that he got a local machinist to help him build a bigger version that could provide power to his family’s farm.

A few years later, with more tinkering, he’d scaled up to a point that it took two people to carry a blade. Executives from a local manufacturer of hydraulic cranes came over to check out his turbines and drink coffee. Replacing expensive, polluting fossil fuels with wind made sense, even before climate change became a pressing concern.

Stiesdal struck a licensing agreement with the executives, which eventually led to mass production and later a full rebranding as Vestas Wind Systems A/S. The company is the world’s largest wind turbine manufacturer, with more than $13 billion in revenue last year. In its official corporate history, Vestas acknowledges that its earliest efforts—designed to look like an egg whisk—failed to produce enough electricity to be viable. But Stiesdal’s prototypes, the company writes, are “essentially the same three-blade model used today.” And not only by Vestas: The same configuration is used all over the world, by scores of manufacturers.

The inventor worked with Vestas until the mid-1980s, then went on to a job at Bonus Energy, a Danish turbine company that was later bought by German industrial giant Siemens AG. That’s where he orchestrated the introduction in 1991 of the first offshore turbines able to withstand harsh conditions at sea. “He’s like the godfather of wind,” says Tom Harries, who analyzes the sector for BNEF.

Offshore turbines are now scattered around the world by the thousands, the product of billions of dollars of investment. The latest and largest, an 860-foot-high machine from Siemens Gamesa that will be tested next year in northern Denmark, is almost as tall as New York’s Chrysler Building. As turbines have multiplied and spread, costs have fallen sharply—down more than 60% in the last decade.

In the next two decades, the IEA expects the offshore industry to attract $840 billion—almost as much investment as natural gas. Most of the biggest developers right now are European power companies such as Denmark’s Orsted, Germany’s RWE, and Spain’s Iberdrola, which have increasingly shifted away from fossil fuels. In China, the second-biggest offshore market after Europe, companies such as China Ming Yang Wind Power Group Ltd. and Xinjiang Goldwind Science & Technology Ltd. have sold hundreds of turbines domestically.

“The cork is coming off the bottle,” Stiesdal says. “With the cost reductions we’re seeing, we’re outcompeting with all kinds of fuels. You can’t build gas-fired plants and coal plants and nuclear plants that can match wind.”

A successful floating platform would push open new wind markets and potentially generate billions of dollars of turbine contracts. The earliest glimpses of this future, ironically, come from pilot projects started by fossil fuel companies, which have long expertise in extracting resources from the seabed using platforms. Designs for wind versions vary, but the most prevalent use steel or concrete to support a single turbine. Some models have a tube shape, with a turbine on one corner. Others look more like a buoy, with a turbine bobbing on top. The main engineering challenge is keeping the machine in the right position; a slight rotation can move the blades out of the wind. The designs rely on cables and anchors to keep the platforms in the right spot. Buoyant turbines fitted with anchors can be put out at sea in water as deep as 1,000 meters (3,281 feet).

On the economic side, “the key bottleneck is the floating foundation,” says Jason Cheng, managing partner at private equity firm Kerogen Capital. “We think that’s where a great amount of the value will be captured.” Kerogen mostly invests in fossil fuels, but it’s taken a stake in Ideol, a French platform developer. Cheng says he liked that floating wind draws on proven technologies. “Because it’s already been developed in oil and gas, we know what those solutions could look like.” 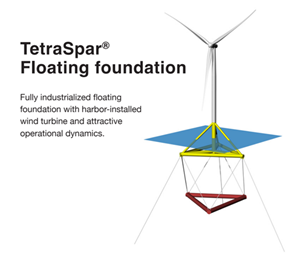 If floating platforms are to help wind power achieve anything like the almost unlimited capacity anticipated by the IEA, companies will have to bring down costs. Floating introduces a whole new expense in the manufacture and installation of platforms, in part because mooring cables get more expensive as water gets deeper. Transportation costs could be lower, because floating platforms can be towed from port rather than erected at sea, but that’s not enough to offset the cost of a technology that isn’t designed for mass production. “It’s not copy-paste from oil and gas,” says Manahil Lakhmiri, head of offshore wind at Engie, which is working with California-based Principle Power Inc. on a floating pilot project off Portugal. “What we see today is there’s one floater made every three months,” she adds. “We need one floater per week.”

That’s a problem Stiesdal has solved before. The turbines he helped pioneer proved quite scalable—they became as prevalent as they did because their components could be produced quickly and cheaply. His new floating platform, dubbed TetraSpar and backed by oil giant Royal Dutch Shell Plc and German utility Innogy SE, aims to industrialize the industry. He’s also working with Welcon A/S, one of the largest turbine tower manufacturers. That’s allowed Stiesdal, an independent inventor, to create a prototype at factory speeds.

His platform is predominantly made with the same materials as a turbine tower, with much of the labor at the Danish factory done by robots. Machines roll out the steel and do most of the welding, while workers fit pieces together and perform finishing touches. “It would be quite easy to mass-manufacture them,” says Rune Holm, a project manager at Welcon. “If you want the industrialization, you should use some of the knowledge you already have.”

Stiesdal’s competitors include Norway’s Equinor ASA, the first developer to get a floating wind farm out on the water, a pilot project of five turbines off the coast of Scotland in the North Sea. The company plans to scale up with a larger venture in Norway that’s expected to cost about $500 million. Another major competitor is Principle Power, which is backed by Spanish oil company Repsol SA and EDP Energias de Portugal SA. Principle has already tested its design in the Atlantic with some of the largest turbines on the market.

Even with a mere handful of floating pilot projects out on the sea, energy analysts predict exponential growth to follow fast after the technology is established. If floating wind reaches 3.5 gigawatts by 2030, as BNEF forecasts, that pace would track the one followed by traditiona