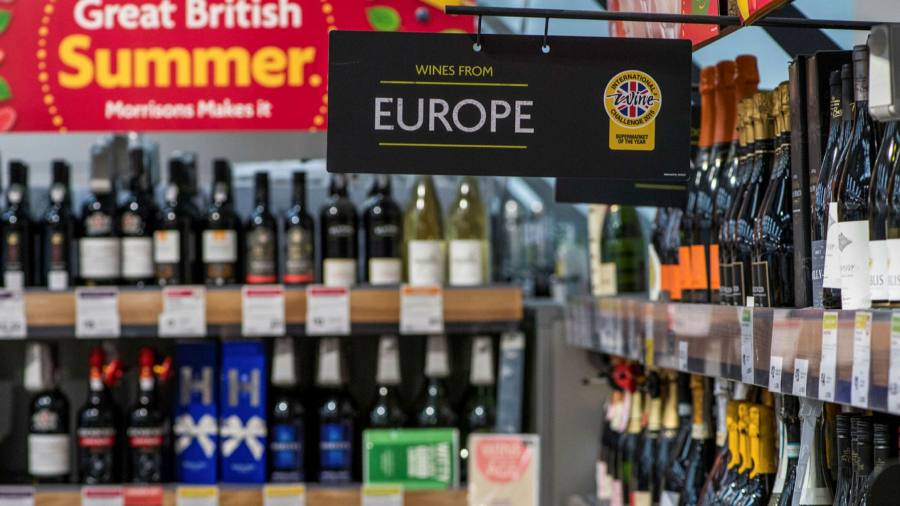 The UK wine industry has accused the government of misleading the public over the cost of not securing a trade deal with the EU, warning that prices would rise and choice fall given the “catastrophic” impact from border red tape.

Victoria Prentis, a minister in Defra, the department that covers food and drink, told Parliament this week that costs for importing wine after Brexit were expected to be “nil or negligible”. This caused outrage across an industry that has spent months lobbying the government to relax trading rules set to be imposed on European wines after the Brexit transition period — which runs out at the end of 2020, if no deal is secured with Brussels.

More than half of the wine drunk in the UK comes from the EU, and this can enter at the moment without checks. If Britain fails to agree a trade deal with the EU, import certificates — known as VI-1 forms — will be needed for every consignment of wine from the bloc, requiring costly lab analysis to keep wine flowing.

This could cost up to £70m a year for the estimated 600,000 consignments, with each form likely to cost around £20 and laboratory tests needed for many shipments at £300-£400. Industry executives estimated these would add about 10p to the price of a bottle of wine.

Exporters of the estimated 150,000 consignments of wine leaving the UK for the EU each year will also have to complete a VI-1 form.

Executives said they wanted the government to scrap the system after the transition period.

Supplies to the UK from some smaller vineyards are expected to dry up as a result.

Replying to a question in the House of Commons, Ms Prentis said: “As inspections for imported wine are undertaken on a risk-based percentage, regardless of origin or import certification, no specific assessment has been made regarding additional costs of controls, although it is expected to be nil or negligible.”

Miles Beale, chief executive of the Wine and Spirit Trade Association, said that it was “extremely disappointing that despite four years of discussing this issue with Defra the facts have fallen on deaf ears and the minister has confirmed that the government has not even bothered to make any assessment”.

He added: “The minister has been highly selective in focusing on the costs falling on UK enforcement bodies of requiring import certificates for EU wine and has chosen to completely overlook the significant costs falling to exporters, importers and ultimately UK consumers if we leave without a deal.”

The costs of additional VI-1 forms for EU wines will not be “nil or negligible”, he said. “The truth is that for UK wine SME businesses, they will be catastrophic and are likely to put people out of business.”

The industry said the government had not responded to its calls to waive the need for additional documentation and tariffs on wine if there was no trade deal by the end of the year.

Defra officials insisted Ms Prentis had not been misleading, as the question posed related to the cost of inspections for imports rather than any cost to industry.

They added that ministers were confident the British public would continue to have a wide range of good-value, quality wines to choose from after Brexit.

A Defra spokesperson said: “We know how important our wine industry is for the nation and the economy, which is why we have removed the requirement for import certificates on wines from the EU during the transition period.

“With negotiations under way, we are continuing to work closely with the wine sector to minimise any disruption to the flow of wine in and out of the UK after the transition period.”

John Charnock, managing partner at Jascots Wine Merchants said: “This avoidable additional cost must be recognised and taken seriously — we cannot afford additional burdens on our business at this most trying time.”

John Colley, chief executive of Majestic, a wine retailer, added: “Over 60 per cent of the bottles we sell come from the EU, and a requirement to introduce new, costly and burdensome VI-1 forms to keep wine flowing at the end of the transition period would, both inevitably and unfortunately, lead to price increases for our customers.”

Asian Shares Are Stable as U.S. Shares Move Up