WTI crude oil futures have found resistance at the 41.60 barrier, sending prices sideways in the short-term. Oil is keeping its position above the moving averages despite the contradicting signals in the momentum indicators. The MACD is holding beneath its trigger line in the positive territory, while the RSI is pointing marginally up in the bullish region.

In case of more upside pressures and a successful climb above the immediate resistance of 41.60, the next hurdle would come from the 61.8% Fibonacci retracement level of the down leg from 65.68 to 6.70 at 43.04. Breaching this line, the 48.80 barrier and the 54.60 resistance could be in focus, taken from the peaks on March 3 and February 20 respectively.

Summarizing, the commodity has been in an upside tendency since April 21, while a jump above 65.68 could shift the longer-term picture to bullish as well. 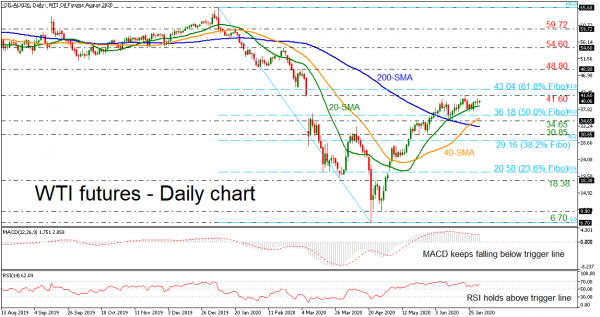 Squawk: Will Gold hold 1200 level will crudeoil bounce from multi…