Risk markets recover mildly today after yesterday’s sharp decline. DOW future is currently up over 500 pts ahead of open, but well short of yesterday’s -1800pts decline. Yen and Swiss Franc turn softer today, followed by Dollar, while commodity currencies recover. For the week, though, Yen and Swiss Franc remain the strongest ones while Aussie continues to lead other commodity currencies as the worst performing. Trading might turn subdue as investors will take the weekend to see how close the second wave of coronavirus pandemic is.

Technically, 1.1241 minor support in EUR/USD would be a focus before close. Break would indicate short term toping and could help Dollar gain some more ground elsewhere. Gold is also recovering after brief retreat and focus is on 1745.14 resistance. Break will further affirm the case of up trend resumption and target a test on 1765.25 high.

Eurozone industrial production dropped -17.1% mom in April, better than expectation of -20.0% mom. That’s the largest monthly decline record since the start of the series. And the contraction was significantly larger than the 3-4% since in 2008/2009 during the global financial crisis. Production of durable consumer goods fell by -28.9% mom, capital goods by -26.6% mom, intermediate goods by -15.6% mom, non-durable consumer goods by -11.9% mom and energy by -4.8% mom.

Jonathan Athow, Deputy National Statistician for Economic Statistics, said: “April’s fall in GDP is the biggest the UK has ever seen, more than three times larger than last month and almost ten times larger than the steepest pre-covid-19 fall. In April the economy was around 25% smaller than in February. Virtually all areas of the economy were hit, with pubs, education, health and car sales all giving the biggest contributions to this historic fall. Manufacturing and construction also saw significant falls, with manufacture of cars and housebuilding particularly badly affected. The UK’s trade with the rest of the world was also badly affected by the pandemic, with large falls in both the import and export of cars, fuels, works of art and clothing.”

Japan Aso: We’ve succeeded in putting a floor on the economy

Japan Finance Minister Taro Aso told the parliament today that “we’ve succeeded in putting a floor on the economy, which seems to have hit bottom. Looking ahead, “how strong the recovery will be depends not just on domestic conditions but overseas developments.”

For now, the conditions surrounding the economy will remain “severe” for the time being. However, Aso rebuffed the idea of another set of fiscal stimulus. He said, “we first have to see how the measures we’ve taken so far affect the economy.”

BNZ Senior Economist, Craig Ebert said that “still, a negative tone remains evident in the fact that, even with its bounce in May, the NZ PMI merely got back to the sort of levels in sank to during the 2008/09 recession.”

Intraday bias in EUR/USD stays neutral as range trading continues. On the upside, above 1.1422 will target 1.1496 key resistance. Decisive break there will carry larger bullish implications. On the downside, break of 1.1241 support will now indicate short term topping, and turn bias to the downside for 55 day EMA (now at 1.1035). 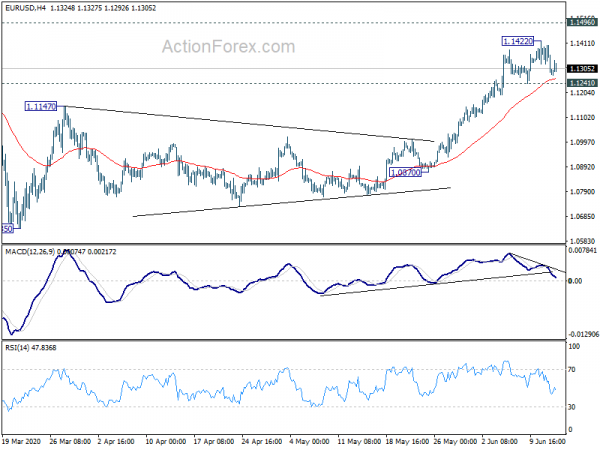 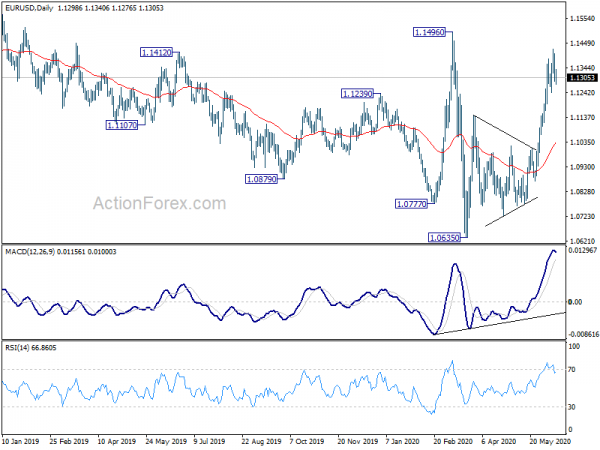 Crude Falls Over 2% While Libyan Adds to Bleak Outlook

USD Rises Today But Weekly Average is Down

Philippine Currency Up, Set For Best Quarter Since 2010